We woke up this morning to dark menacing clouds threatening a downpour at any second.  Yesterday’s sun had been abducted by the force that insisted our walk be difficult to the end. It brought out our innate dispositions, with me tending toward optimism, insisting it would get sunny therefore going without my rain jacket and my husband tending towards pessimism going for the full rain armor.  We set out early after our final “pilgrim’s breakfast” of toast and Iberian ham and cheese.  Our legs and feet felt fresh for this final leg, we were sure we’d cover the next fifteen kilometers in record time.

The Camino continued to be a challenge, taking us through more mud, over bigger boulders, across swollen rivers and along partially washed out roads.  We thought that after the beautiful Cathedral in Santiago, the ocean-side finishing village of Finisterre would be a disappointment but we were wrong.  The sight of waves crashing against the beach as we made our way out of the mountains to walk along the shore was moving in ways we had not anticipated. Further ahead we caught a glimpse of our friends, Andrew and Chris, but they were walking too briskly and we could not catch up. That final ascent to the edge world was for us to walk alone.

As we neared town, we looked up towards the light house at the very edge of the peninsula, but it was barely visible. Like our journey without Gus, it was fitting that our final destination would be encased in fog. Mid-way up the final hill, just as we walked past the statue of a pilgrim appearing to lunge head first into the wind, a ferocious windstorm blew down the hill, pushing us back, but we persisted by taking on the statue’s stance to continue up the road.

The lighthouse was virtually deserted when we arrived, winds swirled and howled all around us, furious, as though we’d done something wrong.  To get to the very edge of the cliff where a bronze boot commemorated the pilgrim’s journey, we had to become more than penitent, we had to become beggars, crawling out on all fours just to take a look.  We had intended to leave our final offering there but were forced to double back to a sheltered ledge we’d seen near the 0 kilometer marker.  There protected from the wind, we pulled out a pair of Gus’ beloved basketball shoes from our packs, each of us having carried one shoe for 215 kilometers.  Through a mess of tears we scribbled our final messages to him, leaving one shoe on the ledge with his prayer card and a cross and keeping the other shoe to bring home as a reminder that we will always carry him with us.  We walked back to the 0 kilometer marker and left our final rocks – one for Gus’ Wito Juan, his Nana Robyn and one for Gus.  We’d just finished taking our final picture, when the heavens opened up, pelting us into seeking shelter at the souvenir kiosk.  For a second we thought we could walk back, but as the sheets of rain came down much heavier than any we’d experienced, it was clear to us that our Camino had ended.  God and Gus were saying it was time to stop walking and call a cab. 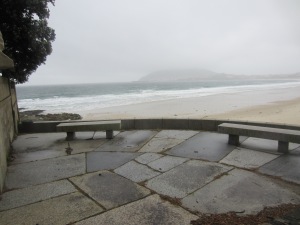 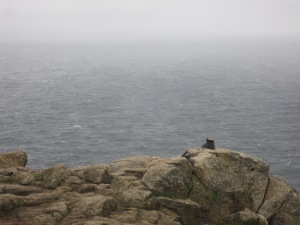 Gus’ shoes – he will always fill the space between us. 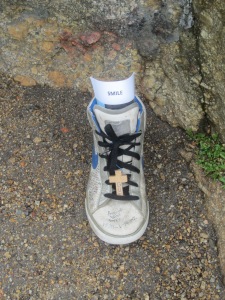 Leaving one shoe behind