Southern California is not known for its changing seasons but they do. Like anyplace else, even here the Fall makes things fall.  The sun is lower on the horizon, the trees begin shedding their leaves, and even the temperature begins to lower so that we have to pull out a sweater in the evenings, possibly even a jacket (it’s true).  It was always my favorite time of year.

It meant going back to school, soccer, football, haunting the house for Halloween, the smell of spiced pumpkin for Thanksgiving and the coming of Christmas. Our house was transformed each fall into a seasonal wonderland beginning in September. I knew it wouldn’t last.  I knew that eventually all of my boys would grow up and fail to see the charm of my decor. It had already started to happen, the older boys grumbled more when they had to help with the boxes, they walked by without noticing the new skeleton in the corner or the new cornucopia on the table. It didn’t matter to me. I still had Gus, he was only ten and still loved every part of it.  Then Gus died and fall fell from my view.  I’ve purged the house of every seasonal trinket now, the last of the table top displays going out just two weeks ago, but fall keeps coming.  It came the year Gus passed, it came again last year and it is here now. It just keeps Fall-ing.

I hate this Fall more than the last two because I noticed something about myself that I didn’t expect so soon.  I’ve become used to Gus being gone and I hate it.  I still think about him the entire day.  I am reminded he is around me whenever I hear the songs we played for each other, like this One Direction song he used to play over and over. I got dressed up this past weekend for a friend’s 25th wedding anniversary and it was playing in the car as soon as I entered. I knew then he liked the way I looked.

And whenever I hear The Wanted’s – “I am Glad you came” I know he is around me.  I used to sing this song to him on our way to the hospital every day.  Last year we were in Vegas for my brother-in-laws birthday and of all the clubs we could have gone to that weekend we just happen to pick the one club at which The Wanted was appearing. We were arms distance from them when they performed this very song.  AND, for my birthday this year, the song played everywhere I went. Even when I stopped at the supermarket, I found the produce guy singing along to it as it piped in from overhead. He turned to sing it to me as I walked by him.

While Gus still fills my thoughts, I am used to not picking him up after school, not taking him to soccer practice, not helping him with his homework, and not coordinating all of his extra curricular activities.  I am used to his physical absence and the silence that follows.  At times, I look at his pictures on the wall and wonder if his presence was ever real.  It is as if he was only ever a beautiful dream from which I’ve finally woken up from, instead of the nightmare my life is without him.

I get up everyday and go to work, I go to the gym in the afternoons and then I come home to watch to our favorite shows with the older boys who haven’t quite left home. This year I picked up cross-stitching again as I watch the NFL on Sundays. From my chair next to the window I can see that the giant california sycamore in our yard is already dropping its leaves.  Soon they will cover the yard all the way up to Gus’ swings which remain motionless. I appear to have fallen back into a routine, one I would have never thought possible. 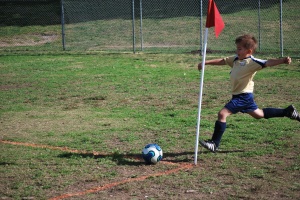 Life is a Camino

I quit my job and bought a 1 way ticket to Europe.

Travel Astronomy: Or Lifestyles of the Rich and Famous

A publication of Parnassus Books

The Art and Craft of Blogging

The latest news on WordPress.com and the WordPress community.