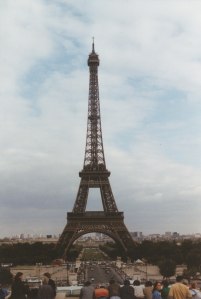 I made it to Paris Abuelita!

Except for the three years we lived in Puerto Rico for my dad’s job, my parents did not take us on any exotic vacations over-seas, extended road trips around the country or even a few miles from our Southern California home unless they were taking us to the movies.  Then and only then would we travel north to the San Fernando Valley, east towards San Gabriel or even as far south as Torrance from our mid-LA home in search of the perfect double feature.  My siblings and I would dutifully sit through two whole movies with only a ten minute bathroom/popcorn break in between in the venue of their choosing and nothing was out of the question. A top of the line drive-in theater with multiple screens that projected the sound through the car radio was just as good as the gravel pit whose car mounds were ground down with use and whose window mounted speakers produced only static; and the brand new state of the art movie theater with Dolby surround sound was easily substituted by a musty theater with sticky seats.  I did not really mind this singular form of diversion because it was a way of making a mental note of where I’d like to visit one day.

If there is a “travel bug” I must have caught it from my grandmother with whom I journeyed each summer to visit the family in Mexico City.  I never thought of these trips as actual “excursions” because I’d been going there since I was a baby and it seemed so commonplace.  Even my grandmother must not have considered the yearly trek a “vacation” as she spent much of the time listing the many places she’d like to visit one day.  She most wanted to visit Paris, France because she suspected she was French deep down although I never knew why.  She suggested that I become a flight attendant (stewardess back then) when I graduated from high school because she’d heard family traveled for free.  When I told her I hoped to go to college, she patted my hand and asked me to give my future more “serious” thought.

My grandparents moved back to Mexico City in the early eighties fulfilling a thirty year dream of returning to their beloved country.  It was then that our visits took on the aura of an actual “vacation”.   With summer the only time my mother could visit her parents and with our visit the only way my grandmother could get my grandfather to leave the limits of Mexico City, we suddenly had a reason to take bus trips to neighboring parts of Mexico like Puebla, Cabo San Lucas, Puerto Vallarta, and Acapulco.

For my high school graduation in 1986, my grandmother cajoled my parents into sending them and me (and my younger sister last minute) to Hawaii for a week.  It was during that trip that the “bug” became a virus.  My grandmother and I had great time.  She’d donned on a grass skirt and danced on stage as I laughed and took pictures while my grandfather and sister looked on in dismay.  We went on a luau, a bus trip through the hills, we walked around town and drank mai tais (it was the last year the drinking age was eighteen).   I made friends, went dancing, and got a deep tan. It was the first time I could really understand that the movies kept me a spectator while traveling made me a participant.  I politely rejected the USC and LMU acceptances and scurried off to Mexico City after our jaunt that summer with the intention of never coming back to Los Angeles.  I was “seriously” thinking of becoming a stewardess.

By October of that year, three months into my self-imposed exile, I was working at an office in the nicest part of Mexico City.  I had new friends, gone on a few “interesting” dates and was just about to apply to a Mexican airline when I got a phone call.  My grandmother had fainted and was being rushed to urgent care.  When I arrived at the hospital she had regained consciousness but was very dizzy and nauseous.  I held her hand in the back seat of the car as we drove across town to a specialist for a diagnosis. She held smelling salts to her nose to keep from vomiting and I held a bucket in case they failed. The doctor told her she was lucky to be alive, an aneurysm had burst and she needed an emergency operation.  We were walking into the hospital to have her admitted as a large family burst into tears having gotten some terrible news.  I took it as a sign that I was about to lose my grandmother. The operation was postponed from Friday to Monday, confirmation that it was the end because it gave my mother time to get there and be with her.  I remember telling her to get better so that we could travel together.  She smiled and nodded as they wheeled her away. She never recovered from the surgery and passed away a few days later just seconds after my father arrived with my siblings.

Without my grandmother, the new life I was considering was no longer appealing.  I came back to LA, went to college, met someone, had two boys, got divorced, met another someone, fell in love (real love) and despite our recent loss have been happy together for nearly twenty-three years.  I look back on my life and realize that my grandmother has been right there all along.  Not only is this man, my saint, my best friend and the love of my life, we’ve been fortunate to travel together nearly everywhere my grandmother ever wanted to go.  I’ve made it to France, Spain (twice), England, Italy and Greece. We’ve visited many states within the US, gone on cruises, and been back to Mexico many times.  I don’t know where our next adventure may take us but I do know my grandmother (with Gus’ added help) is making it all possible.  Participate in your life don’t watch it go by.